Sorry! You missed Eric Church at Legacy Arena at The BJCC 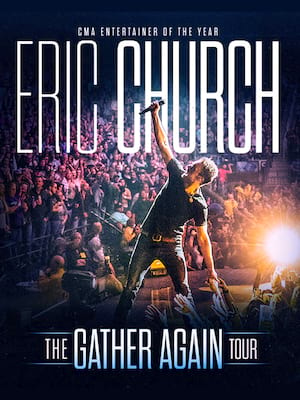 Double down with Eric Church!

Eric Church is pushing the boundaries of music performance once more as he announced his Double Down Tour! In this extra special event, the celebrated Country star will perform two separate three-hour shows in each city he visits. In this musical event like no other, Church will draw from his extensive back catalogue as well as featuring his new tracks from his latest album, Desperate Man to give you a night of pure musical enjoyment

Eric Church is one of modern country's most exciting talents. Unafraid to venture outside of the genre's usual musical boundaries, his five studio albums have drawn influences from classic rock, disco and grunge, producing a gritty and earthy sound that is as innovative as it is catchy. Get your chance to see Church in his trademark aviators and trucker hat when he plays (twice!) in your town!

*Please note that Eric Church's event at the Nissan Stadium in Nashville will only be performed on the one night. This is due to size of the venue and the ability to have more people enjoy the show!

He was amazing. Great artist and he gives 110% to his fans, a definite... more

Such energy and he was amazing! ACC was rockin! No openings just him... more

Sound good to you? Share this page on social media and let your friends know about Eric Church at Legacy Arena at The BJCC.