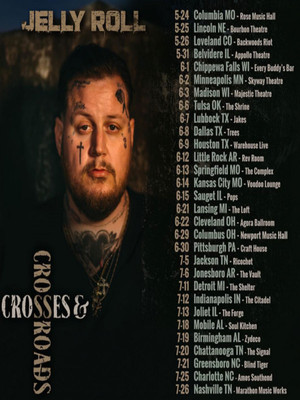 Jelly Roll has an amazing way of telling stories through his lyrics while maintaining a flow in the vein of artists like UGK, 8ball and Chamillionaire.

JellyRoll Prepares to Hit the Road with New Album and Tour

Nashville native rapper JellyRoll saw his music career kick off in 2010 when his track 'Pop Another Pill' with Lil Wyte received over 1 million hits on YouTube. Two years later he released his debut 'The Big Sal Story' and 'Whiskey, Weed & Waffle House' in 2013, which famously landed him in a court case with the popular restaurant chain. Today, the rapper has 13 albums under his belt and prepares for a country-wide tour.

His latest album 'Whiskey Sessions II' was released earlier this year and is an exciting look into what else is to come! In his online bio, he describes his music as "all based on emotions and stories from my life as well as people around me. I want to convey to people the power of faith and perseverance and I hope that it helps them to find a light in whatever darkness they may be going through in there life."

Sound good to you? Share this page on social media and let your friends know about Jelly Roll at Zydeco.