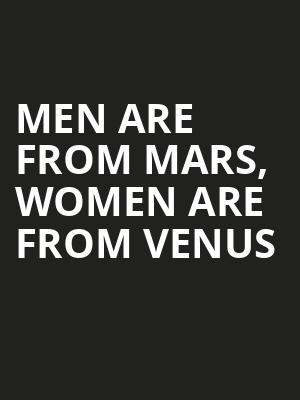 A hilarious one-man-parody from the New York Times #1 best-selling book of the last decade. The show was a hoot!

Men Are From Mars, Women Are From Venus is a hilarious one-man show which takes on the classic battle of the sexes in a part comedy theatre, part stand-up format. Presented by the incredibly talented Peter Story, the show takes on a range of topics - even the more taboo ones - from the dating to bedroom relations.

The production is based on John Gray's best-selling book of the same title, but expands upon the same humor and theories presented in the book as a live comedy show where you'll find yourself squirming as you relate to many of the scenarios acted out on-stage! Men Are From Mars, Women Are From Venus is a great date night out as well as a girls night out, and an unlikely but effective source of inspiration and advice!

I didn't like this show at all. It was a one man show. So Male perspective... more

Sound good to you? Share this page on social media and let your friends know about Men Are From Mars, Women Are From Venus at The Lyric Theatre - Birmingham.