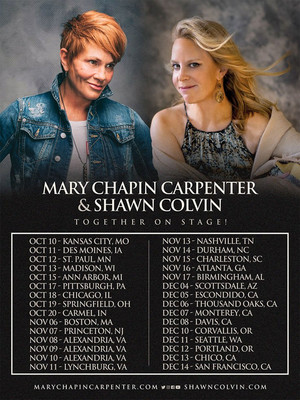 Carpenter and Colvin friends for more than 30 years will appear on stage together as an intimate acoustic duo, swapping songs and sharing stories.

Singers Mary Chapin Carpenter and Shawn Colvin will head across the country on a co-headlining tour this October. The two songstresses will be joining forces for an unforgettable series of performances celebrating the many hits that they have between them and singing duos including some guaranteed audiences favorites.

Carpenter began her career in the 1980s as a country singer and released her most popular and memorable album 'Come On Come On' in 1992. She went on to receive many Grammy Awards including 'Best Country Album' and 'Best Country Vocal Performance' four times. Her latest album 'Sometimes Just the Sky' was released last year.

I have like Shawn colvin' music for years and saw her twice before. While... more

Sound good to you? Share this page on social media and let your friends know about Mary Chapin Carpenter and Shawn Colvin at Jemison Concert Hall.